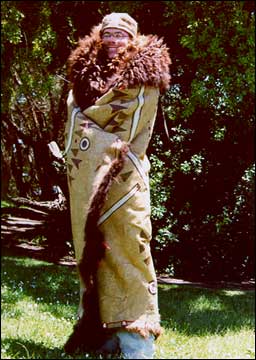 Markus Klek wrapped in one of his hides.

With this article, I am picking out one small element of the complex interrelationship of native people and their environment and what can be learned from it today. I would like to honor the Buffalo Nation and all our non-human relatives, whose lives we take to sustain ourselves, and maybe help to reevaluate the way we use our resources, especially when a life has been spent for them. The buffalo is one good example of this tragic process; a creature that has been exploited to its almost complete destruction. Even today this tragedy is continuing to a certain degree in Yellowstone National Park, home of the last wild and unfenced buffalo herd in the USA. For information check www.wildrockies.org/Buffalo.

The article will describe the art of tanning raw bison hides into robe size hides with the hair left intact; similar to the way as practiced by the women of many Native American tribes on a large scale, until the end of the 19th century. It will be a step by step description of the work process and also the use of bison hides, including quotations and observations made by early travelers and pioneers amongst native tribes of the 18th and 19th century.

I still remember a drawing I made when I was a kid back in Germany. It was a self-portrait of me dressed in leather with a fur cap on my head and a rifle in my hand. I presented it in school and explained that I wanted to be a trapper when I grew up. The teacher laughed and said that all little boys liked cowboys and Indians and that those feelings would disappear, as we grew older. I was very angry with her. The underlying fascination of the powerful buffalo, that shaggy beast, that in our modern world looks like a relict of times long gone by, stayed with me for all those years.

My first encounter with live buffalo was a rather unimpressive one. In my early twenties, I traveled to New York and went to visit a friend in Buffalo, NY. After arriving at the train station at night, he drove me to the local zoo to see the namesakes of his town. There they were, in a small enclosure, sadly staring from the dark into the headlights of our truck. Today I live in San Francisco and am fortunate to have a small herd of bison close by. They live in Golden Gate Park in the middle of the city (for info check the site: www.bwfly.com/watchbison ). I got my first real piece of buffalo from those animals in the form of shed winter hair that I collected when I was volunteering to help clean up the paddock. Then one day I ran across the address of Jim Miller of Michigan, the first man I heard of, who was brain-tanning buffalo hides and teaching classes too. When I called him, he said I need not apply for class until I had tanned at least a half dozen deerskins and a bunch of pelts. Therefore, a few years later after I had accomplished that, I traveled to Michigan in January and was fortunate enough to have a one on one class with him. (call Jim at "Willow Winds" 515 736 3487 for information on his classes or a copy of his booklet "Braintanned Buffalo Robes, Skins and Pelts") 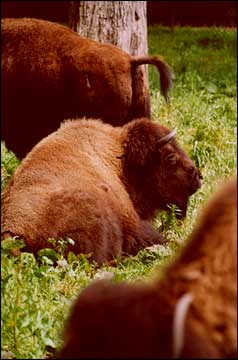 Braintanning is not a strictly Native American art, but was practiced in many parts of the world throughout human history. For example, the Iceman from Italy wore braintanned skins. ("Der Mann aus dem Eis "by Angelika Flechinger and Hubert Steiner, also "Leather" by Lotha Rahme on European tanning tradition)
Unlike modern day commercial tanning, braintanning is an environmentally safe way of tanning that does not use or produce any toxins or chemicals.
These tanned buffalo hides had a multitude of uses for native people. They were used as bedding, for example among the Kiowa as described by J.J. Methvin: "When a boy or girl grows up to sufficient size or age, a Pa-lo-tle-ton is set apart for his or her exclusive use. This is a buffalo robe, neatly dressed, made of a full skin, with the head fastened by the lips to the heads of their lounge- like, willow beds. The On-ta-koi is the ordinary robe for the bed. It is only a half robe, and cut off also at the neck. The hide of the Pa-lo-tle-ton is carefully taken off, with all the skill of the taxidermist, so as to preserve its full covering of the head, with even the horns and eyes and ears and lips, and also the legs down to the hoofs, and sometimes even the hoofs are retained." 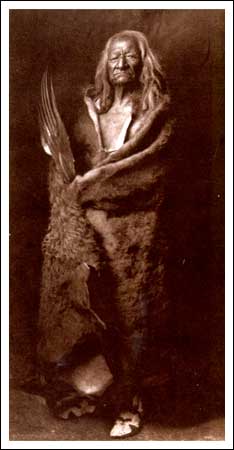 Bison robes were also worn by both sexes instead of overcoats to give protection against the elements. As Marquis writes about the Crow: "Often such an article served as a substitute for an entire suit of clothing with only the ever-present Indian breechcloth underneath". Jesuit Joseph F. Lafitau writes in the 18th century: "they drape themselves in robes, holding the skins closed with their hands unless they were traveling, in which case they would tie them with a belt towards the middle of their bodies". Boller also observed among the Mandan, that women getting firewood in winter were: ".belting their robes around them in such a manner that, while affording a complete protection of their bodies, the free use of the arms was not interfered with." The robes also doubled as canvases for representing belief systems or experiences of individuals or the society as a whole. The female symbol language used for painting hides, varied from the artistic language of men. The decoration of hides could be a very organized undertaking that was highly esteemed in the society. (See Grinnell's description of women's privileged Quilling societies among the Cheyenne or Virginia Bergmann Peters statement of Mandan women wearing rings and bracelets to show the number of robes decorated) The third use of hides was as trade items in intertribal trade and especially as a major trade item in trade with non-natives, to procure the highly valued European made goods. James A. Teit for example states of intertribal trade in "The Salishan Tribes of the Western Plateaus": "The Crow robes were most highly valued. Often a horse and, in addition, a well made leather shirt, was paid for one of the best robes." On the other hand, James W. Schultz relates an episode on a trading transaction in 1879, between a white trader and the Blackfoot man Bear Head, who paid 10 "head and tail" (full uncut skins) buffalo robes for a 44 caliber Henry repeating rifle including 300 rounds of ammunition. (As stated below, one woman was able to prepare approximately 10 robes a season) Of course, prices varied over time and region and so did the quality of the prepared robes amongst the tribes.
Swiss artist Rudolf Kurz observed the following in the middle of the 19th century: "The Absaroke (Crow) are famous for their robes, in no other nation are the dressed skins so soft and pliable." Whereas Verendrye writes a century earlier that the Mandan dress skins more skillfully than any other tribe.
Another area where tanned robes found use was in various religious ceremonies that required representation of the Bison or its significance to the people. Participants would wear or use the robe to represent or call upon these properties.
Black Elk, the Lakota holy man, has described the use for robes in almost all of the sacred rites of his tribe. These robes were tanned in a ritual manner, but I have not found any reference to a description of such a ritual. The hair of the buffalo was believed to contain the soul of the animal. Especially skins from albino bison were highly valued by most tribes. These white hides found use for example in the buffalo-calling ceremony of the White Buffalo Cow society among the Mandan.
Joseph Epes Brown says in his book on Black Elk: "The buffalo was to the Sioux the most important of all four-legged animals, for it supplied their food, their clothing, and even their houses, which were made from the tanned hides. Because the buffalo contained all these things within himself he was a natural symbol of the universe, the totality of all manifested forms. Everything is symbolically contained within this animal". A complete investigation of the complex role the buffalo played and still plays for many North American tribes is more than can be accomplished in the framework of this article.
Virginia Bergman Peters' book, "Women of the Earth Lodges" cites a lot of miscellaneous uses for tanned and untanned bison hides. It includes making them into sleds in winter, using them as scare crows in corn fields, or making hides into "trampolines" by holding onto the edges and tossing people into the air. The list is endless, further products made of buffalo skins include tipi covers, clothes, shields, boats, bags etc. A buffalo hide is a very versatile article. 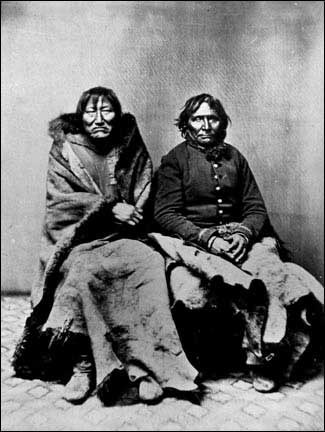 E-mail your comments to "Markus Klek" at markusklek@yahoo.com.
Markus Klek resides in Germany.