After a European atlatl friend told me about conical antler points found in French caves that were supposedly used as atlatl dart points, it raised my curiousity. There were many of these points found about 6 inches long and half inch in diameter with a scarf and point at opposite ends. Mostly made of caribou antler. They dated as far back as 18,000 years. It's suggested that many of the Ice Age animals were hunted with these points. The problem is there are no bleeder blades, stone flakes, mastics, or grooves on these points found by the archeologists.

As a bow and atlatl hunter living in Alaska, I'm familar with the use of broad heads for the quick killing of large game animals. If a deer or caribou size animal is hit with just a conical field point, it will run for miles leaving very little or no blood trail to follow, resuting in a lost animal to the hunter. The point will easily go straight threw the animal, but the shaft stays in the wound and prevents blood loss. Points without blades to cut a wider wound channel seem to me a bit of mystery. Then I remembered the Eskimos used moss and water on their sled runners to protect them. Also, during World War II, British scientists suggested building a super size aircraft carrier made of a frozen mix of sawdust and water. It was called Pykrete, named after its biggest advocate, a Mr. Pyke. The hull was to be 40 feet thick and torpedo proof. A small version was built and tested in Canada. So I thought pykrete, just frozen sawdust and water, maybe it could be used as a glue to secure stone flakes to antler points. Even in Anchorage, Alaska, it's below freezing (32 degrees F.) continuosly for a least 5 months. Many Natives fish in the summer and hunt in the winter. Ice Age Europe had to be as cold or colder. So I mixed up a paste of water and sawdust and globed it around a stone flake. You have to keep the point horizontal with the flake sticking straight up until it freezes. That takes about 15 minutes at 20 degrees F. Then flip it over and glue on another flake on the other side of antler point, or just keep the microblades on one side like a harpoon. You can trim off the excess blob of ice glue with a sharp knife or add more to make it more secure. 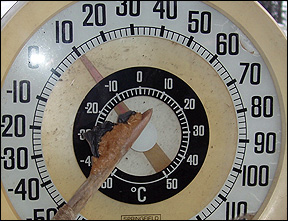 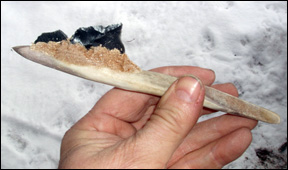 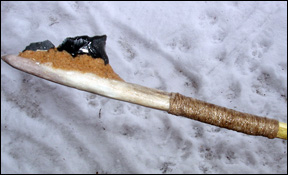 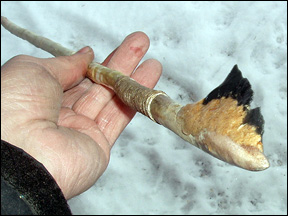 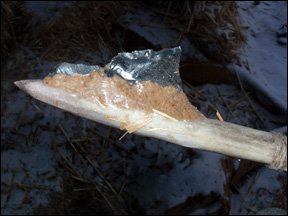 I tested these points with bleeder blades stuck on with this ice glue against 4 inches of hard blue foam board insulation. Throwing from 10 to 20 yards dozens and dozens of times. Penetration was superb. The microblades stayed in place without grooves or any other type of mastic. 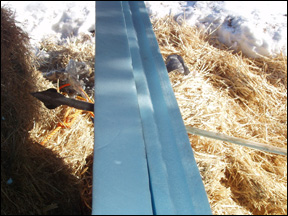 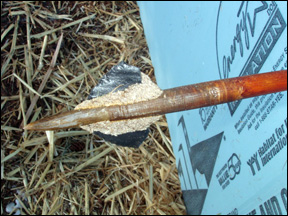 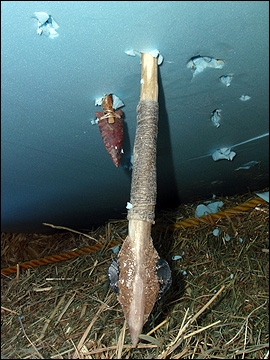 The ice glue freeze dries fairly quickly, but you only need to wet the surface to recondition the ice glue. Spit works well. I also tried moose dung, which in the winter, is basicly sawdust in pellet form. It worked just as well. The beauty of this system is that it is so field repairable. If a dart or arrow misses its target and breaks off a microblade, you ownly need to carry a few moose nuggets and a small bag of extra stone flakes. A half hour or less to make your repair. I kept these microblades on my caribou antler points for three weeks straight. They are extremely robust and worked far better than I could have imagined. 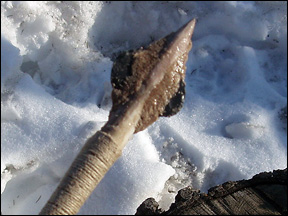 If it is'nt cold where you live, try making up short points in the freezer just for the fun of it. You'll be impressed with how strong this stuff is.

"Thinking outside the box."