Fishing with Poisons
By Chuck Kritzon © 2003

In my studies of California Native Cultures, I was often surprised to keep coming upon plant-use references documenting "fish poisons". In widening my search, I became aware that most indigenous cultures across the Americas and indeed on all continents in the temperate areas of the world, used poisonous plants to catch fish. Below is a small sample of fish poisons and the indigenous peoples who used them. Further study will present the reader with a much greater breadth of information. 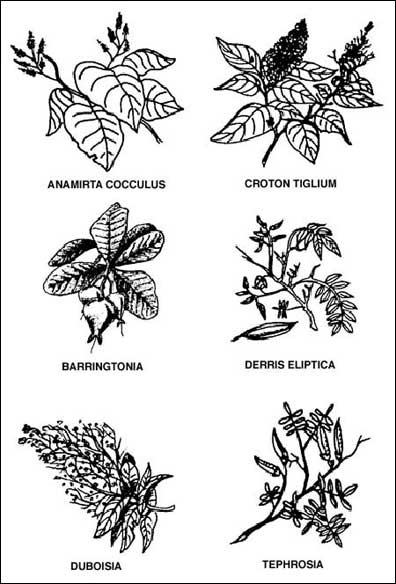 Most fish poisons, also called icthyotoxins or piscicides, occur in several related plant species. A variety of chemicals found in these plants will stun fish when it passes through the gills or in some cases ingested. The fish then floats to the surface for easy capture.

The active ingredient is released by mashing the appropriate plant parts, which are then introduced to the water environment. Poisoning was generally done in stagnant pools or slow-flowing streams and rivers, that allow the pounded bark, leaf, seed, root or fruit, to concentrate its power without being washed away or diluted by a strong current. Sometimes streams would be partly blocked to slow down the water flow. Gathering the fish was usually done by hand, but baskets, spears and nets were sometimes employed.

Although primarily used in fresh water areas, Australian Aborigines and Californian Indians also used this technique in saltwater environments for octopus and low-tide shellfish fishing as well as for catching fish trapped in inter-tidal pools.

This ethnological report from Cape York Peninsula, Queensland, Australia, shows that with some Native Peoples, the cultural and material world was not separated:

A secret, sacred song of the Pascoe River bora (initiation cult) was sung by 60-year-old George Morton accompanying himself with his own drum. The singer was born a Kandyu but married a Wutati woman who was the daughter of one of the great Wutati bora singers who handed down the entire repertory of ancient bora songs to him. This song tells of a turtle that used a medicinal vine as a poison to catch fish in a rock pool at low tide.

The use of plant poisons to catch fish is still used in many places in the world today. In Guyana, fishers pound the root of Lonchocarpus on logs fallen across a stream and allow the juices to drip down into the water. Brazilian gold miners, who probably learned the technique from the displaced Yanomami Indians of the Amazon, also toss pulped plant material into a very slow moving stream where the fish would surface down stream and be washed into a net set in place by the fishermen. 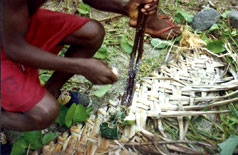 Grating Barringtonia seeds on the island of Tanna for use as fish poison.

The Carib Indians, who live along the Barama River also in Guyana, use a modified technique. A ball of bait is made from baked Cassava (Manihot esculenta) mixed with the pounded toxin-laced leaves of Clibadium. The small balls are thrown into the river where the fish swallow the balls whole. As with the previous methods, the stupefied fish floats to the surface for easy capture.

H.E. Anthony reported another example of fish poison use in South America in 1921.

"Another poison which is extensively employed by the Jivaros is barbasco (a common name for any plant used as fish poison), a jungle vine or creeper, which is put into the rivers to secure fish. A great pile of the plant is beaten up on the rocks until it is a pulp, and after the Indians have stationed themselves down-stream, some of their number throw 2-3 hundred pounds of mash into the river and the fishing begins. The fish are killed and float down, belly up, to be gathered in by the Jivaros, who see them as they pass.

So potent is this juice that large streams may be poisoned by this relatively small amount of barbasco and under favorable circumstances fish are stricken for a distance of three miles down-stream."

The pandemic need to find plants that work well as a soap, i.e. the ability to make lather and suds when agitated with water, has been pursued by most native cultures. The experience of using various plants selected for their soap like properties, led to the universal discovery that chemicals from these plants would also stun fish when used in a specific circumstance.

The two primary chemicals that occur in most plants used for stunning fish are saponin and rotenone.

Saponins normally break down in the digestive system and must enter the bloodstream to be toxic, but fish take in saponins directly into their bloodstream through their gills. The toxin acts on the respiratory organs of the fish without affecting their edibility. Saponins also cause the breakdown of red blood cells that help the toxin to spread quickly. Even though the effects of the poison are powerful, they are not usually fatal. Fish that are washed away into untainted water revive, and can return to their pre-toxic condition. Because of this, the fishermen would have to gather the stunned fish quickly as they floated to the surface.

Saponins are one of a group of glucosides found in many plant species with known foaming properties when mixed with water. Saponins lower the surface tension of water allowing the formation of small stable bubbles. The amount of foam created by a crushed plant sample, shaken with water in a jar, is a good indication of the amount of saponins present.

Saponins have been used in modern times in the manufacture of fire extinguisher foam, toothpaste, shampoos, liquid soaps, and cosmetics and to increase the foaming of beer and soft drinks.

Plants containing rotenones are the second most utilized as a fish poison. Rotenone is an alkaloid toxin, in a group called flavonoids and stuns fish by impairing their oxygen consumption. The plant is toxic only to cold-blooded creatures and is found almost exclusively among the family comprised of legumes (Papilionaceae, Mimosaceae, Cesalpiniaceae). Rotenone is also used today as an insecticide.

Below is a short list of indigenous peoples and the plants they used to poison fish:

Professionals today, to control fish populations or to eliminate alien or destructive species, use the same plant toxins: saponin and rotenone. Practicing primitives may be eager to experiment with the techniques listed above, but great care must be used, as the toxins are not selective and will eliminate all fish in the water where it is introduced. Keep in mind what is down stream and may be affected by these poisons. These chemicals will generally break down in sunlight. If you choose to use this technique, be aware that fishing with poison (even natural poison) is illegal in most states. Check your local laws.

A Lesson From the Amazon

Professor Sir Ghillean Prance relates this story from an expedition in which he was a member in the 1960's:

"The Maku Indians of the upper Rio Negro region of Brazil are well known for their fish feasts, where they go to a small river and catch a large number of fish by using fish poisons. The time I arranged to watch one of these, we were told that we must set out into the forest early in the morning. After two hours of a very fast walk we came to a small stream and I was glad to have arrived, but our leader said 'not here'. We came to another stream an hour later just to be informed the same again. This process continued for about eight hours when finally the chief proclaimed that this was the correct stream.

We were almost too exhausted to observe the preparations as the men built a frame over the stream and placed their sacks of the fish poison leaves (Euphorbia cotinifolia). Meanwhile the women stirred up the muddy stream and the men began to beat the leaves so that the plant juices dripped down into the water. Very soon fish began to float to the surface and were gathered up by excited women and children.

We had a banquet as all the fish were roasted on fires and eaten. I asked the chief why we had to walk so far to carry out this operation. The answer I received was that they had poisoned fish in the first stream two moons ago, in the second five moons ago etc., until I got a complete description of when each stream had been used. He then informed me that if they poisoned a stream too frequently there would not be any fish left.

How unlike the fisheries off the British Isles, Japan or Newfoundland where fish like cod have been mined almost to extinction. These Indians are aware that you manage such natural resources rather than over-exploit them to extinction. Could we not learn from this harmonious co-existence with nature and become better managers and less greedy about our natural resources?"

Fallon, S. and Enig, M.G., 1999 Australian Aborigines-Living of the Fat of the Land
Price-Pottager Nutrition Foundation Health Journal Vol 22, No. 2

Prance, G., 2002 The Harmonious Co-Existence Between Plants and People
Lecture for the Cosmos Forum on botany to commemorate the awarding of the tenth International Cosmos Prize ­ Osaka, October 2002

This article was also published in The Bulletin of Primitive Technology (Spring 2003, #25)
E-mail your comments to "Chuck Kritzon" at chuckk@petroglyphics.com