Coppicing a Cultural Thread
from the Past to the Present

The art of Native California basketry reveals a culture's tradition, history and the intimate relationship between the weavers, the environment and the seasonal cycle. The art form speaks of the care and spirit put directly into the basket by its weaver. The woven container shows the mind of the maker and the knowledge of traditional skills to prune, gather, prepare and twine (or coil) the various plant resources.

Coppicing dates back to a time of Native California hunters catching steelhead trout with basket fish traps and gatherers carrying loads of acorns in their burden baskets. Basket weaving is one of the important cultural threads in the Native California communities. A thread that carries with it traditions as well as a respect for the land and its resources. Pruning and fire-setting were the few land management tools that the native weavers used to promote the long, flexible willow withes needed to make a shapely basket.

The elegant combination of functional purpose and aesthetic beauty can be found in a whole shoot, twined willow basket. A basket made of willow has its beginning in a process called coppicing or pruning. Coppicing is a practice of environmental management used by Native California basket weavers. It involves pruning a plant back to its base and removing the weak shoots to encourage vigorous growth. The plant is allowed to regrow from the cut stumps. Willows are coppiced to stimulate the propagation of long, slender and flexible branches or shoots. The willow withes are utilized in the warp elements (lengthwise threads) and weft elements (horizontal threads) of the basket. Coppicing provides an environmentally sustainable source of willow withes through periodic cutting, which actually prolongs the life of the tree. Besides preserving traditional skills, pruning creates a rich mosaic of habitats, attracting a diverse range of flora and fauna. 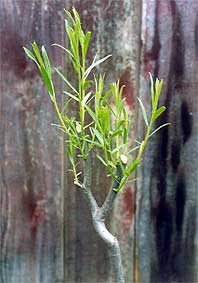 Coppicing is based on the principles of plant physiology. In order to prune effectively, a weaver has to know something about how a plant grows. A plant has three main structures: roots, stem and leaves. The roots main functions are to absorb water and nutrients, to anchor the plant in the soil and to store food, which is released when required by root cells or distributed to above ground parts. The stem supports other plant parts, such as leaves and flowers. It also transports materials and stores certain materials. The leaves main function is photosynthesis. Photosynthesis converts energy from the sun to chemical energy. It is then synthesized to glucose and other organic compounds necessary for the plant's nutrition.

The stem (also called shoot, trunk, twig, branch or limb) carries water and nutrients from the roots to the plant's growing points (buds, leaves and flowers). It also carries food (sugars) that the leaves make to the roots. Since stems are conveying tubes, it can be cut off to divert the flow of nutrients to other buds and branches. By stopping growth in one direction, growth can be encouraged in other directions.

The willow coppiced in the photos is Hinds willow (Salix hindsiana). It is also called Grey willow. The narrow leaves taper at both ends and are covered with gray, silky hairs. Hinds willow inhabits moist soils of ditches, sandbars and stream banks. Its range is usually confined to California.

Another species of basketry willow

is Sandbar willow (Salix exigua). This hardy plant has perhaps the greatest range of all tree willows in the United States. It is found throughout the interior from the Yukon River in central Alaska to the Mississippi River in southern Louisiana. The leaves are very narrow and pointed at the ends. The colors of the leaves are gray-green on both surfaces. Sandbar willow grows in wet soils, especially riverbanks, sandbars and silt flats.

Not all willow withes are as flexible as Sandbar or Hinds willow. To test a willow to see if it is suitable for basketry withes, pick a thin branch or shoot (preferably from one year's growth and no side branches) and try tying an overhand knot without cracking it.

Hinds willow thickets in the wild have dense growth with lots of weak shoots all competing for the light. These dense thickets have the effect of taking all the light away from the plants and grasses growing underneath, eventually eliminating them. Most of the new branches and shoots in the spring become infested with insect larvae that make them undesirable for baskets. To control insect infestation and to cultivate the thin, long branches for basketry withes, a patch of willow is coppiced to provide an indefinite supply of branches. The willow regenerates itself, without the need for a continuous cycle of planting. The willow is pruned back while the plant is in its dormant stage during the winter season or early spring. This is the time of year when the sap is low in the plant. Generally, willows that are native to cool or cold-winter regions are dormant during their leafless period. The best time to coppice is when it will least shock the plant, which is when it is not actively growing. 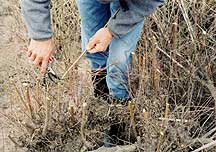 Besides creating rapid regrowth from the edge of the stumps and removing poor specimens, coppicing Hinds willow has other benefits to the environment. It increases the amount of light on the ground allowing some flora to flourish, which in turn supports more diverse wildlife. Also any diseased growth is cut away before it can spread throughout the whole tree. For the best willow withes, the plant is coppiced severely during its dormant period to promote fast growing, straight shoots for the following year.

Coppicing willow first involves trimming away the small twigs. Then medium stems and large trunks are cut about a foot above ground level. When the stem falls, it does not rip the wood near the final cutting place. All stumps are then cut two inches above ground level. The clean, smooth surface cut is angled, with the top sloping outwards to allow any rainwater to drain away. Successful coppicing required sharp tools, whether using stone spalls or modern pruning saws and loppers. 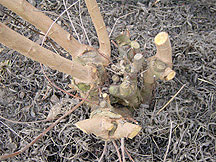 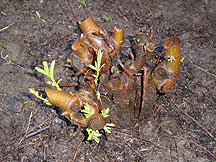 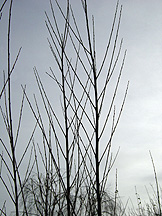 For whole shoot, twined baskets, one year's growth of willow withes is harvested in late December or January. Gathering is anytime between the dropping of the leaves and the appearance of new buds. Tamara Wilder and Steven Edholm mention a few notes on harvesting willow withes in their article entitled, "Whole-Shoot Willow Baskets":

"If the shoots are gathered in the dormant season (from leaf drop to bud swell), the bark will adhere tenaciously. If they are harvested in early spring (just after bud break), the bark slips off easily. By mid spring, anything that was not cut will begin branching out and will become less desirable. We prefer to harvest during the dormant season and weave with the bark on. This way the shoots are less prone to cracking and have greater wear resistance."

Native California basket weavers understood the importance of gathering during the right time of the year. The shoots have a lot of water when the willow is growing, which causes them to shrink more when drying. 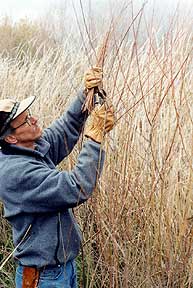 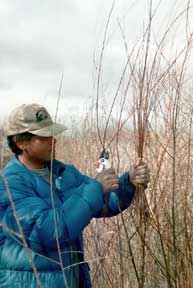 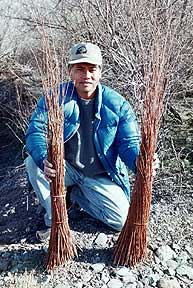 After gathering, the willow withes are completely dried, stored and then reconstituted later for use. This creates a finished twined basket that is stiffer and tighter. To reconstitute willow, the withes are completely submerged in a container of water. Flat stones are used to keep the withes from floating to the surface. After the willow becomes flexible, the material is woven into a utilitarian basket. 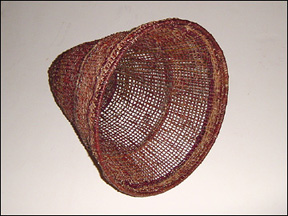 State Parks, wildlife preserves and National Parks have laws prohibiting the cutting and gathering of wild plants. Know the laws in your area before attempting to practice any skill. Also, get permission from the landowner before coppicing wild plants on private property. Be responsible to the environment and to the plant. Learning about coppicing skills involves knowing about the growing cycle of the plant and ensuring that the plant will continue to propagate. A quote from a Coast Miwok/Kashaya Pomo basket weaver: "Utilize nature's bounties wisely by not taking more than what is needed and by not wasting what is taken."

This article was first published in The Bulletin of Primitive Technology (Spring 2006, #31)
E-mail your comments to "Dino Labiste" at KahikoArts@yahoo.com