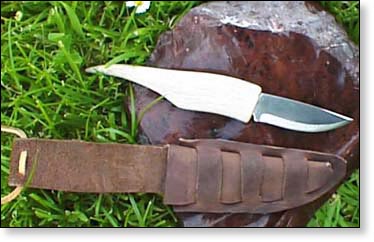 Question: How do you affix a knife blade with a tang to an antler tine without using any adhesives?
Answer: Using the natural parts of the antler tine as the bonding agent.

The pithy core of an antler tine can be softened and allowed to reharden to form a tight bond to the knife tang. The procedure is simple, but the time from beginning to end is long. If you're patient, you'll be pleasantly satisfied with the results.

When the core is ready, you may notice an odor coming from the antler. Submerged in water for so long, bacteria has begun to work on the antler. The antler is still good. The smell may be unpleasant for some. If it bothers you, work outdoors or in a ventilated area. Drying out the antler after you've completed your work will get rid of the odor.

Next, cut the tang of the blade with a hack saw into a wedge shape to help facilitate the insertion of the antler tine. Also, cut the length of the tang to fit into the pithy area (see the "words of advise" section below concerning the pithy area and the tang). Tape the blade and point with enough duck tape to keep from accidentally cutting yourself on the sharp blade. Clamp the blade in a steel vise with the tang sticking up. The clamp should come all the way up to the blade, just before the tang begins. This will keep from bending or breaking your knife during the insertion process. Also it would help to place a soft material, like cloth, between the clamps and knife to keep the blade from getting scratched. Wear leather gloves for added protection. The vise will keep the blade steady for the next step. Position the antler tine over the tip of the tang and PUSH the antler into the tang. Do not wiggle the antler from side to side. It will widen the hole in the pithy core or it might break your tang as you insert the antler further. Use your body weight as leverage and gently push the antler into the tang. With a bit of elbow grease and patience you'll eventually push the antler tine all the way down to the hilt of the blade. Occasionally check the vise to see that the blade is not moving or loose. Take your time and do a good job.

More words of advise:
1. Be aware that the end of the antler tine is solid and does not contain any pith. You must compensate for that portion of your tine. The pithy section will start to narrow as it gets close to the solid portion of the tine. Do you have enough width and length of the pithy area to accommodate your tang?
2. Do not restart the procedure after you have started by pulling the tang out of the antler for whatever reason (example: the blade is going in crooked). The pithy core is not like rubber. The hole will not close up after you pull out the tang. Starting over will only widen the hole and will give you a loose bond. Think about what you are going to do ahead of time so you won't make a mistake during the procedure.
3. Once you have worked the antler onto the tang, be careful in easing the final part of the antler down the tang. DO NOT bend the tang from side to side. It will break.

After you've inserted the tang, let the antler tine dry out completely until the odor disappears. The bond is just as good as using epoxy. It's natural and strong.

Another alternative to soaking the antler for a long period of time, is to boil the antler in water. As the antler is boiling, check the pithy core every now and then to see if it has softened. When it's ready, remove the antler and continue with the mounting process. Is boiling better than the soaking method? I haven't done any comparison tests with a boiled antler and a soaked antler, but my guess is that boiling the antler too long will tend to make the antler brittle. If you just boil the antler until the core has immediately softened, it will make a good knife handle. It's just a matter of how patient you are with this project.

If you are looking for knife blades for this project, check out the website below. They sell Swedish knife blades.

For antler pieces, check out the website below. The company is called Moscow Hide and Fur. They are located in Moscow, Idaho in the United States.