If you live near the ocean, there is bound to be a fishing port somewhere along the coast. Where there are fishing boats, there are fish markets nearby to sell the marine catches from the fishermen. Some of these fish markets will have shark meat to sell for public consumption. Most of the shark meat sold will have the skin attached. You may either buy the whole meat with the skin or talk to the owners to see if they will give you only the shark skin. 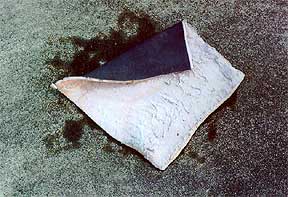 To begin the process of turning your shark skin into rawhide, start by separating the skin from the meat with a knife. Be careful not to cut into the skin. You'll find bits of meat and stringy membrane still attached to the underside of the skin. With a butter knife, placed at 90 degrees to the underside of the skin, scrape off as much of the remaining meat and membrane as possible. 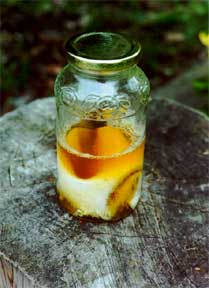 You may or may not use the next procedure. This involves soaking the shark skin in a jar of urine for a day or two. Some indigenous cultures have used this process to dissolve any fatty tissue or loose meat from animal hides, thus making the cleaning process a lot easier. For additional information on urine tanning, read Lotta Rahme's book, entitled "Leather: Preparation and Tanning by Traditional Methods". 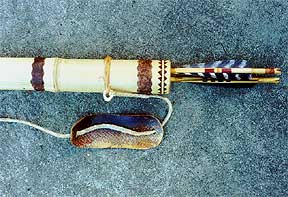 I have used the urine solution on salmon skin, since the salmon skin is greasy. The photo above shows a finished, processed salmon skin glued to a piece of leather that I used for a shoulder pad on my quiver strap.

Soaking the shark skin in urine didn't do much for the cleaning process, since the skin was not fatty to begin with. The urine bath did soften thin layers of meat still clinging to the skin, thus making it easier to scrape off. I thoroughly rinsed the shark skin in fresh water to get rid of any urine odor after soaking in the urine solution for 2 days. I also squirted some antibacterial soap into the water to rinse out any further urine smell. I then took a butter knife and did a final scraping of the underside of the skin. 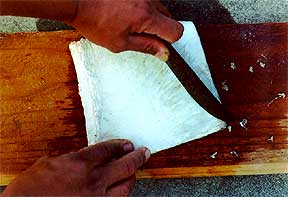 You'll notice from the photo that not very much membrane was scraped off. If you do a good job at the beginning of scraping the underside of the skin, you don't have to do the urine bath. 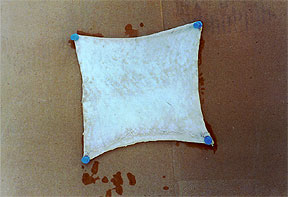 Squeeze out as much of the water from the shark skin. Stretch out the skin and tack it to a cardboard to dry. The cardboard will help to absorb some of the excess water. 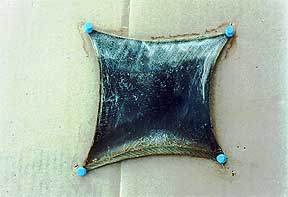 As the shark skin dries, it will shrink on the cardboard and may pull the tacks loose. Inspect the skin every now and then and remount any loose tacks. 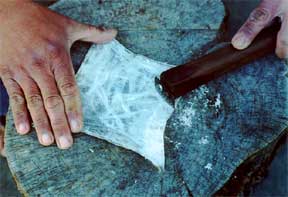 After the skin has totally dried, you will need to thin out the skin. With some kind of scraping implement (I used my hide scraper), scrape the underside of the shark skin. If you don't have a hide scraper, use your knife (not the butter knife, but a sharp knife) at a 90 degree angle. Be careful not to cut into the skin. 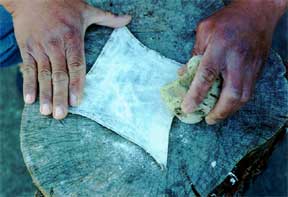 Further abrading can be done with a pumice stone or sand paper. 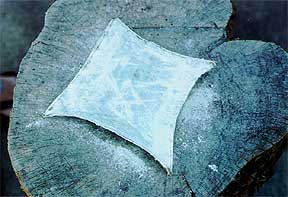 Thin the shark skin according to what you will be using the rawhide for. 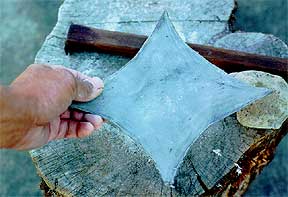 NOTE: The process above will only take the shark skin to the stiff rawhide stage. The denticles are still attached to the skin. This is not a method to tan the shark skin into supple leather.

Historically, shark skin has been used as an abrasive and, in Asia, to decorate sword hilts and sheaths. Dried, but untanned skin, called shagreen, was once used like fine sandpaper for polishing wood. Shagreen was also used for

the membranes on drums in the South Pacific.

The most characteristic feature of shark skin is its roughness, resulting from the placoid scales, or denticles, embedded in the skin. It was not until World War I, however, that a way of tanning the skins of large shark was found. The breakthrough was made when a chemical process that could remove the denticles without affecting the tanning process of the hides was developed.

Scientists, today, realize that these powerful creatures play a vital role in the intricate balance that makes up the oceans' ecosystem. Brutal modern fishing practices, such as long-lining, and new demand for shark fins have decimated shark populations around the globe. Add to this the fact that sharks come to sexual maturity relatively late in life and have small litters when they do give birth. Generally, the catch rate for sharks has been twice the birth rate in recent years. Not a good combination. Perhaps because many governments lack data on shark populations, the depletion of sharks continues at a dangerous pace. Without proof of diminishing numbers, it is hard to ask fishermen to cut back. Still, many would agree that protecting sharks from the ravages of overfishing is a global imperative.

This slaughter has not drawn much public sympathy because many people view sharks as a menace. Yet the truth is that sharks are a vital link in the food chain. Sharks are an apex predator, which means they are at the top of the food chain. This also means that there are not a lot of them. If there were, it would upset the balance of the ocean and they would eat too much until there was no food left in the ocean. Sharks play an important role in keeping the ocean healthy and in balance. Their feeding keeps the populations of fish from becoming too high. Sharks also keep fish populations healthy by eating the sick and injured fish, which stops those fish from reproducing and improves the genetic pool. Sharks are also scavengers. They eat dead fish and mammals or any other meat they can get. When shark populations decline sharply, the results can be dramatic, upsetting the balance of the oceans and producing unintended consequences with effects that can reach around the globe.