I can think of no other Stone Age skill that satisfies and intrigues me as much as the hand drill method of friction fire.  Since learning about it two years ago, I have been consumed by its delicate intricacies, tempermental nature, and its sheer power to transform physical prowess into self-reliance.  What an absolute miracle it is to start with twigs and branches (or roots or shelf fungi!), add refined kinesthetic form and determination, and be able to coax not only the essence of combustion out of a seemingly inert material but finally one of the most important catalytic tools humankind has ever harnessed!   Hand drill can provide an exacting metaphor for the span of human life—from the obvious anatomical symbolism of human union between the genders to the birth of a spirit in need of nourishment and encouragement in order for it to be sustained and grow into a breathing and consuming (and perhaps sentient, for it seems to be drawn toward its needs) entity, distinct from its genesis. 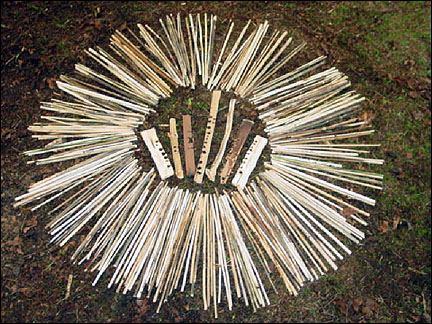 In order to better understand this evolution from friction to fire, I gathered spindles from 52 native and 22 non-native species of trees, shrubs, forbs, and lianas (plus one grass) and applied them via hand-powered rotational friction to four species of hearthboards (clematis, two redwood pieces of different densities, CA buckeye, big-leaf maple).  There were many aspects to the nuances of hand drill that I was curious about, and my results are outlined below.  Throughout these experiments I took care to adhere to the technological parameters afforded by the paleolithic and mesolithic standards that I aspire to emulate—no metal implements were used.

The Baseline Data
Table 1 displays the successes and failures I incurred trying to attain an ember with each of the 370 possible wood combinations.  I also offer a very subjective effort rating for each attempt, with a 1 representing a low expenditure of energy (around a minute or less in duration), a 2 corresponding roughly to a two minute endeavor, while a score of 3 defined what felt like an average effort (three to four minutes).  A 4 was given to a successful attempt that took longer than around four minutes and required multiple sockets (having burned through the first one).  I assigned a 5 to failed ember attempts. 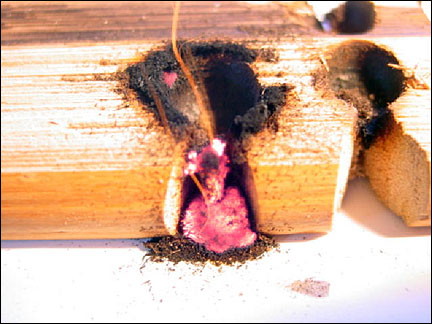 Wanting to somehow check the accuracy of this effort rating system, I calculated the average effort for all attempts (4.0).  By definition, this number should have been much closer to my arbitrary average rating of 3.  A previous, similar bow drill exploration of 1,946 wood combinations (go to www.stoneageskills.com for that data) gave me an average of 3.2 from all effort ratings—a figure that exhibits a more consistent estimation of effort comparison.  This tells me that, since hand drill is generally more difficult than bow drill, I tend to misjudge the relative ease and difficulty of hand drill attempts more than with bow drill.

The Role of Wood Density
Given my interest in the discussion of the merits in having a softer spindle versus a softer hearthboard, which has been entertained in some primitive skills publications, in Table 2 you will see my measurements of the specific gravity, or density relative to that of water, of all the woods.  The paucity of relative density data for our tree species in California caused me to measure it myself as follows:

Measuring Relative Density
1.  Fill a tall, narrow vessel with water (bucket, graduated cylinder, capped PVC pipe).
2.  Slowly submerge your spindle or hearth board until it begins to float.  I like to dip the non-working end (the tip of the spindle that doesn’t end up in the hearth board’s socket) first—there’s something counter-intuitive about purposefully dunking your fire sticks underwater.  You want to notice where the floating water line is, so don’t let your wood bounce into the water.  You can mark the water line with a pencil—otherwise you can see the boundary between wet and dry wood.
3.  Measure the length of the portion of your wood specimen that was underwater and divide that into the total length of the wood to get a percentage.  If the piece of wood totally submerges under the water, then it is denser than water (Lignum vitae, a vine found in Florida, does this) and will result in a specific gravity of over 1.0.  Most woods will only partially submerge, giving you a fraction under 1.0.  The number you get, in of itself, is not important.  It is only when you compare two findings, such as poison hemlock’s 0.14 specific gravity against snowberry’s 0.90, that you can derive some meaning (the latter is six times denser than the former).

Please note that every species of wood, even from the same tree or even the same branch, can vary in its density.

Green vs. Dead vs. Nascent Growth
A friend of mine once noted that nascent growth (otherwise known as sucker sprouts, stump sprouts, adventitious growth) spindles seemed to work better than wood from regular branches.  I like nascent growth for its straight form, as seen with big-leaf maple, CA buckeye, CA Bay, and other softer hardwoods.  Table 3 shows my efforts comparing the use of nascent growth, green-cut and dead-cut spindles on CA buckeye and redwood hearthboards.  The limited data doesn’t support the advantage of nascent growth but does show the value of collecting dead wood for use as spindles.

Non-Notched Hand Drill Embers
Finally, I tried my hand at producing hand drill embers without carving the notch into the socket. 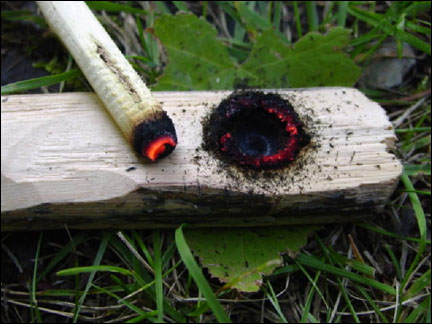 I wanted to see if I could take a step out of the process in order to make it easier.  Table 4 illustrates that I was able to produce an ember only 28% of the time, which re-enforces the value of the notch (unless a person sticks to those woods that generated embers).

I hope that this endeavor proves useful to you.  I encourage you to experiment with your local woods and share your findings.  I hear some people are compiling a national database of good friction fire woods—please feel free to add this data.

Kneeling
Favored by hand drill practitioners because it allows your upper-body weight to bear down onto the spindle. 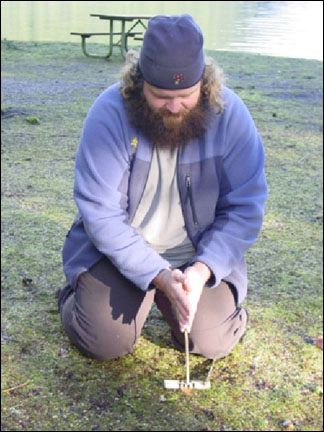 Speaking of pressure, I performed hand drill (Mule Fat on Sotol) a few times on a doctor’s scale to measure the downward pressure necessary to generate an ember.  Using the regular technique—7.8lbs.  Using solely the floating method—4.4 lbs. 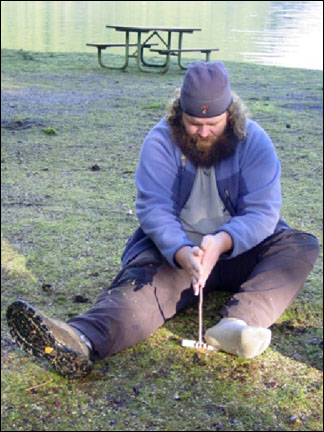 Sitting
Although it takes more exertion to generate an ember in this position, some folks (like myself) find this more comfortable.

Contact Point
Notice how the “working end” of the spindle nestles into a pre-drilled socket (carved by a stone knife or quartz crystal-tipped hand drill).  The removed wedge provides a place for the char, or disintegrated wood powder, to accumulate. 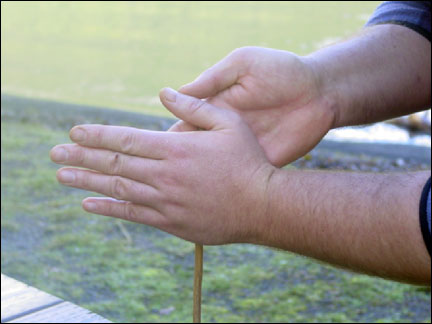 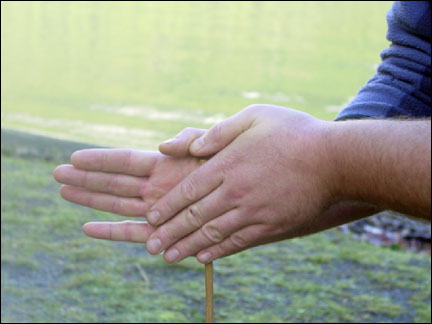 Floating
These two photos illustrate the fluid, alternating, U-shaped motions that the hands perform in order to sustain spindle-rotation—which may result in quicker ember formation. 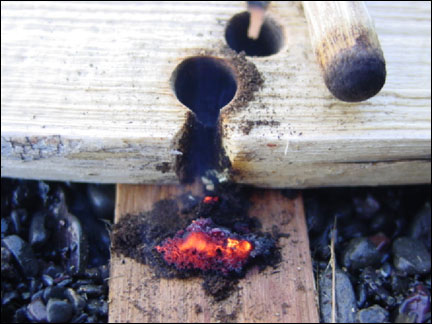 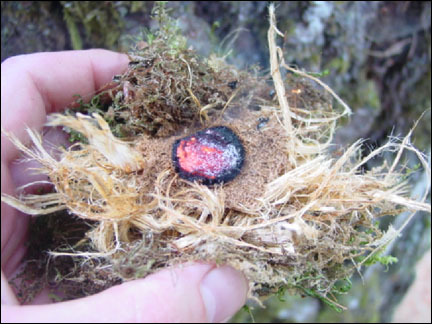 Ember
The miracle of friction fire reveals itself.  Transfer this fire-egg to a tinder nest and hatch it into flame.

Visit Storm's website at www.stoneageskills.com.
Storm (1969 - 2008)
Storm immersed himself into the wellspring of adventure and the experience of the Stone Age. Thank you, Storm, for sharing your heartfelt enthusiasm of the wilderness and skills of the past through your engaging articles. You will be sorely missed.