The type of gear used to create a fish dinner is totally determined by the type of fish, its habits, its size and the place you're catching it. Deepwater fishing is very different than shallow water. Size matters a lot. Spears function in at least three different ways -- stab 'em, grab 'em and pin 'em down. Harpoons stab into fish (or other creatures) and have barbs to keep them from pulling out. With a toggle harpoon, the end comes off and turns sideways inside the animal's body, and is attached to the fisherman by a strong cord. Harpoons are best suited for large animals, up to whales and fish, like salmon.

A specialized spear grabs medium size fish of the trout / steelhead size between a top point and two upwards angled points which slip past the fishes body on flexible wood pieces and then lock the fish in. This is called a Leister in England, but is found all over (a set of bone pieces for one came out of a bayside Indian village site in California). Once set up, this spear will only work on one size of fish.

The third type of spear works by pinning the fish to the bottom in shallow water. This is what Tom Hanks appears to be using in the movie "Cast Away", although he somehow makes it defy physics when he throws it 30 feet and impales a fish. Multi-pointed gigs are also popular for taking bullfrogs.

One of the big challenges with spears (and arrows) when fish are underwater is refraction - the bending of light. The fish isn't where it appears. To compensate, many spears and harpoons have two or more points, so if one misses, then another might hit. A second technique is to wait for a large fish to come to the surface before harpooning it. Many people use torches at night to attract large ones to the surface. A third approach is to keep the spear underwater and watch the "bent" looking end to guide the thrust. 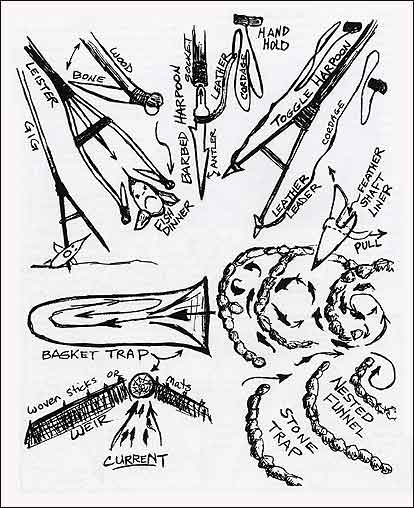 Most fishing in the "good old days" was done during runs, or migrations when there were great numbers of fish to catch. During these events, weirs were often set up to direct the fish to the spear. A weir is a fence across a stream with one way through. Weirs were also used to direct fish into traps or nets.

Traps work on basic fish psychology. Fish migrating upstream will go upstream no matter what. Fish look for a way out of a trap by following the edge. A fish at the end of a trap will turn along the trap, be forced back around, but won't usually turn the sharp corner to get back out. Shoreline traps made by stacking stones in the shallows use this feature, and often use nested funnels to insure the fish stay put. A limitation for weirs and traps is the speed of the water, which can rip them apart. So learn your stream and think like a fish.

This article was first published in The Bulletin of Primitive Technology (Spring 2003, #25)
E-mail your comments to "Norm Kidder" at atlatl1@aol.com